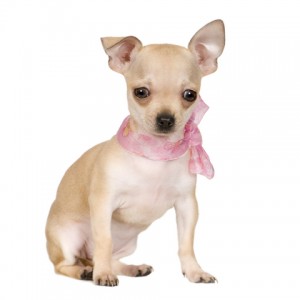 If you are a dog lover, for sure you are interested in the facts that you need to know when growing a puppy or you want to take one. And if your favourite breed is Chihuahua, there are a lot of interesting things that you may want to know. This is actually the breed that has the most different variations regarding the color, shape or coat of the dog. The coat lengths might be only two types – long or short, but it is not like that when it comes to colours or the body of Chihuahuas. You can see this breed almost in any colour you can imagine – sable, fawn, black, brindle, tri-colored, rare blues and even rare whites, and others. And about the body, you can have a Chihuahua that is only four inches short or the totally opposite – a foot tall, and this is because some Chihuahuas have short legs and bodies and others are with long, slender legs and long bodies.

Actually, the term “types of Chihuahuas” is not officially used. According to the AKC breed standards and some other dog kennels there are only two official varieties of the breed, and this is according to the coat – smooth-coat and long-coat. And it can be even more confusing, because AKC officially recognizes only one type of Chihuahua. So when the unofficial standards are used, there are so many different types of the breed, and they are different according to the body type, head shape and coat length. In the list below, you can read about the different types of Chihuahua, except the color types.

So there is the question – why don’t they just separate the Chihuahua into two breeds as they are almost officially recognized as two types? Well, there are a lot of reasons for not doing that and the first one in the list is that they technically are still the same breed. And the second important reason is somehow connected to the first one – it concerns Chihuahua’s offspring, because you can get little puppies with long coat even though the parents are with smooth coat. So you can not separate them into another breed, because you can no predict what type of offspring you may get. 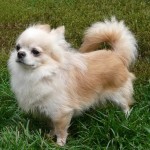 Long-coat Chihuahua: there are officially only two types that are recognized, this is the first one and they are also referred as long-haired. This variety can come in lots of different colours as well as coat lengths – it could be really long to only a little longer than the smooth-coat Chihuahuas. They could have short or long legs and they can appear with a dear-head or an apple-head. 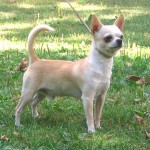 Smooth-coat Chihuahua: this is the second officially recognized type of Chihuahua, also known as short-hair Chihuahua. Just like the first breed type, this one can also come with different colours, shape of the heads and short or long legs. 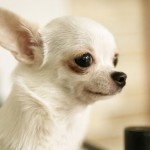 Apple-head Chihuahua: the name of this head type is given because of the similarity that it has with the shape of an apple. This is the head type that is recognized and accepted in the show ring. So if you participate in such types of contests, your dog could be disqualified if it does not have well rounded head like the apple. The reason for recognizing this head type from both types is because it has much more prominent stop and a shorter snout. 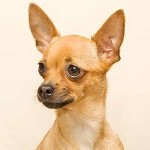 Deer-head Chihuahua: As you can guess according to its name, the shape of the head resembles a deer. This type has usually got longer body and longer legs; it is less prominent, as well as it is more slanted. When it is a question of participating in a dog show contest, this is not the type of breed that is officially recognized, but it is preferred by dog breeders, because these dogs have got fewer genetic problems when compared to the apple-head Chihuahuas and that is why they are healthier.

Fawn Chihuahua: this is mentioned here only to underline that it is some kind of misunderstanding, because actually such type does not exist. This is a type of color and is not anything but only that. 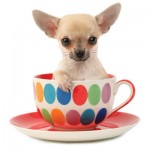 Teacup (Micro/Miniature) Chihuahua: It is the same with the name of this type of Chihuahua; it is not really a type but only something like a term that describes the Chihuahua as a really small one. These little Chihuahuas appear in size from 2 to 8 lbs, and even if you try to breed a small offspring, this is something that can not be predicted, but some people are still trying to achieve this. This term is used by breeders but it is not correct, because it only refers to the size of the dog and describes that it is just smaller then the average Chihuahua, but the term presence among the dog breeders so this confuses people somehow and they get the wrong impression that this is a distinct type of the breed. 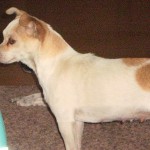 Pear-head Chihuahua: This is one very specific term and is mostly known only by dog breeders so it is not likely for people to hear this description unless they have such a dog. It is not one desirable type of Chihuahua and this uncommon type describes a dog which head is in the shape of a pear, although it is similar to the deer-head type. This means that the head appears with larger prominent muzzle and it is usually with a flatter skull. This type usually can appear when the dog breeder gets together an apple-head and a deer-head Chihuahua. The pear-head Chihuahua can be quite large in size. Although this is not a desirable type of Chihuahua, this is still from this type of the breed. And actually they produce beautiful little puppies and they are wonderful, even excellent mates.