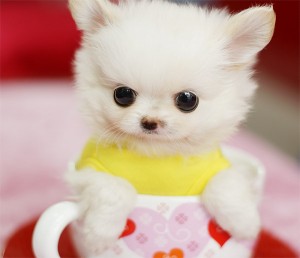 What is a Teacup Dog?

This is actually not a separate breed but a term that describes the size of the breed. And it is quite precise because the size of the dog is really amazing – you can put it in your palm and it looks like it is also large for the little dog.

How teacup puppies are produced?

Breeding such teacup dogs can be really risky for the mother and for the little puppies. Sometimes this undersized offspring can appear by itself without intentionally breeding it, but most of the times it is done with the purpose to achieve it and the breeders put together two undersized dogs to do it. But you need to be really careful if you have decided to get such a teacup dog, because they are often a result of some questionable breeding practices. Due to the high demand of such teacup dogs at the moment, breeders would try to breed them in any way they can which means that they can use dogs that are closely related or they can use really inhuman methods like deliberately achieving the small size of the puppies by letting them starve.

When puppies are produced in such a horrible way they also grow in a slower rate. They often appear to be the “litter” of the mother’s offspring and luckily for them that Hollywood and most famous people think that it is so fashionable to have a teacup dog.

But due to the way they have been produced, they have fragile bodies and their immune system is not stable at all. This is one of the reasons that reputable dog breeders actually refuse to sell such undersized dogs. This gives other breeders the opportunity to even turn to fraud, because it is easy to present a small dog as a teacup dog when it is just a few weeks old. There is no guarantee in the way that the dog will grow, it can get a standard-sized dog, but it can suffer from lots of genetic and other diseases.

When you are trying to raise a two-pound dog which is a product of two dogs with the same size this could be really risky. So what are you going to do when the bills from the vet get larger and larger and in the end the dog can not live any longer due to its small size which is actually killing it? Can you afford those emotional problems that you will be involved in, not to mention the financial issue? You really need to ask yourself those questions before you decide to take an undersized dog. And what is this special thing exactly that makes a two-pound dog better than a five-pound one? Yes, the small size looks cute, but have you thought that it could cause only problems and you will not feel the happiness that a dog should bring you?

When you take a look at some more information before you decide to take such a dog, you will get to the conclusion that these dogs are too fragile for this world. They have lots of health problems. These diseases due not only to their small size, but also to the way they are produced, which includes many questionable methods and practices. They usually suffer from life threatening conditions like hypoglycemia, which is a low blood sugar, due to this reason they have to be fed at least several times a day. In just a few articles you will find some more information about other diseases they tend to suffer like hydrocephalus, liver shunts, etc.

When you put aside the problems that they have with their health, can you imagine what the life of a teacup dog actually is when the size of the couch could be big even for a regular sized dog. They could be easily injured especially when jumping from heights is involved. So can you imagine what a horrible choice a teacup dog could be for a family with children? They would love to carry this adorable little creature everywhere they want and put it on places that the dog would not be able to escape. I can not imagine what a life this would be for the little dog? It is not a fault of the children, but the parents – they need to think if this is a good choice, not only for their children, but for the dog! It is difficult even for a grownup person to have such a small thing around him – you can not be extra careful all the time, so there is also the possibility of kicking the dog because you did not see it. This smaller size makes them less noticeable and more easily to be injured in some way without any actual intention to do it.

If you still have not decided to give up the idea and you want to have a teacup dog, the most important thing that you need to be careful with is where you are going to take it from. The worst choice here is to trust only on the Internet. You need to visit the place, you need to see the breeder face in face, and you have to meet the parents of the puppy. And one really good idea is to get the puppy to the vet for a regular examination before you make the final purchase.

And if you want to take care of a teacup dog so badly, you need to make sure that you took all possible precautions for assuring dog’s safety. You do not want to find the dog with a broken neck because it fell or jumped of the bed. Both of you will suffer a lot – the dog because it is dying and you, because you will miss it a lot and you will blame yourself for this horrible accident.

Amazon Associates ProgramAllDogsWorld.com is a participant in the Amazon Services LLC Associates Program, an affiliate advertising program designed to provide a means for sites to earn advertising fees by advertising and linking to Amazon.com.© Copyright 2022, All Rights Reserved
This website uses cookies to improve your experience. By using this site, you agree to our Privacy Policy Continue
Privacy & Cookies Policy
Necessary Always Enabled