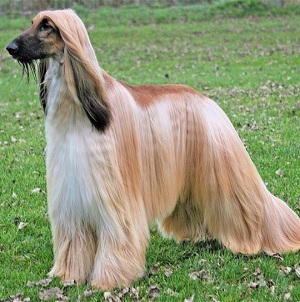 Afghan Hound is a breed that can reach 29 inches in height and about 58-64 pounds in weight. The lifespan of these dogs is approximately 12-14 years and for sure this is a breed that makes impression – people can not help but turn their eyes when such a dog walks into the room.

This is a happy and playful breed that is why they are best suited for families with children, people with big houses and yards and even singles, but they need to be really active. This breed is also known under the name “king of dogs” due to its appearance and general nobility that these type of dogs have. It is a type of “aristocratic” breed and for sure one of the oldest dog breeds. They respond really well to attention, that is why these dogs are well-suited for dog showing.

The aristocratic air of the Afghan Hound can mislead you in your judgment of these dogs and actually they are not a dominant type, but can be really loyal and affectionate dogs. This personality makes them a great companion for people who just want to have a good and well-behaving dog, which will not try to run things. In general, they are quite peaceful dogs, but they are a bit suspicious of strangers when they are not used to see other people or dogs.

To be honest there is nothing special that needs to be in the Afghan Hound’s diet, although those people who show their dogs actually try some different foods in order to achieve a better look of their dog’s coat. So there are no special precautions that have to be considered when owning such a breed, except that you need to be sure that you keep the food level and the essential nutrition that are necessary for the dog to keep its healthy weight.

The aristocratic look that they have is because these dogs seem distant at times, but actually they respond really well to calm training. So there is no reason not to have one obedient and willing to please you dog, when you are able to show an effective leadership.

The weight of this breed is usually around 60 pounds. If you are one of those owners who raise their Afghan Hound for dog shows, you will want to be sure that your dog has the regular weight. If you wish your dog to succeed in this type of shows, the general size outline to your dog’s good adherence will be important to you.

The normal precautions for these dogs should always be taken, no matter that they are considered to be generally healthy breed.

This breed is expected to live about 14 years.

It is important for the Afghan Hound to be regularly taken out. So make sure that you have such a routine with your dog. Take it out for a good and long walk, you can also do some jogging. The dog is able to handle the speed because of their quite long legs. It is well known that dogs should do their exercises every day, and that includes a lot of walking and playing with them, but the Afghan Hound can handle a little more exercises in comparison to the smaller breeds. And they really like playing games, although fetch is not their favorite choice, but if you are patient enough, they can be thought.

The most distinctive feature of the Afghan Hound is the coat without a doubt. This great coat requires a lot of grooming and regular care. Taking lots of care for the coat is especially important if the owner of the dog wants to meet all the standards set for this type of breed by the American Kennel Club, as well as the standards of the dog shows. The jury usually expects that the Afghan Hound will have the proper coat length at certain areas.

In general, the personality of the Afghan Hound is not being dominant or aggressive. Little puppies should be grown as any other little puppies – they should be thought to understand what their boundaries are and to be properly socialized so that they are not afraid of strangers or other dogs.

You can not deny that this breed is with really ancient origin due to the fact that there is evidence for this like the paintings in the Afghan caves which are more than 4,000 years old. The good news about the breed is that no matter how ancient it is, it managed to stay relatively pure.

Perhaps not many people know that the Afghan Hound were used as hunters and shepherds, because they are sighthound, which means that they do not use so much the nose and the scents but rather hunt by sight. And they are able to hunt game as deer and goats and due to the thick coat they have, Afghan Hound can be used in extreme seasons.

Because of the fact that this breed is so ancient, it is difficult to trace its history so far away back in the past. There is some hypothesis that scientists can offer about the areas where the breed probably originated. Although there is not so much known about the Afghan Hound, it is actually one of those rare breeds that can be thought of having its own pedigree.

AKC – The American Kennel Club recognized the breed in 1926.